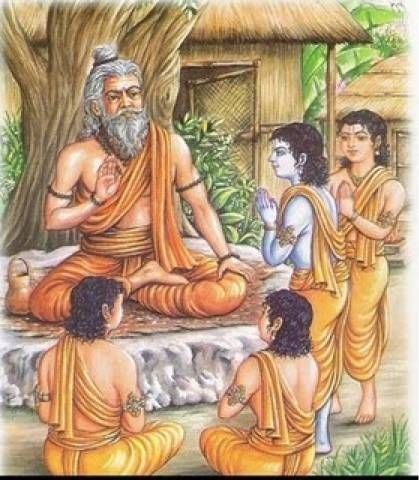 Guru–shishya means “succession from Guru to Disciple”. Paramparā literally means an uninterrupted row or series, order, succession, continuation, mediation, Tradition. In the traditional residential form of education, the Shishya remains with his or her guru as a family member and gets the education as a True learner.  All Classical Schools of Yoga trace their Lineage from the present teacher to the first teacher by going backwards in time. The significance of a lineage to any tradition rests in the fact that due to different personalities of different Gurus in the lineage, the teachings over time automatically become modified and developed in subtle breadth and depth. The presence of Lineage also gurantees that the knowledge transmitted retains its essence and does not diluted due to biases and prejudices of the egos of different Gurus.

Salutations to the glorious primal (original) guru, Lord Shiva, who instructed the knowledge of Hatha Yoga which shines forth as a stairway for those who wish to ascend to the highest stage of yoga, Raja Yoga.

Swatmarama the Author of Hatha Yoga: Swatmarama, the author of this text, belonged to the Nath Sect, therefore he respects Shiva in the form of Adinath. Yogi Swatmarama goes on to explain that Hatha Yoga is to be utilized as a means of preparing oneself for Raja Yoga, the supreme state of Yoga.

Lineage of the Siddhas

Yogi Swatmarama shows the lineage of the siddhas of Hatha Yoga. Gorakhnath, who was probably   the guru of Swatmarama, belonged to a very popular yoga sect called  the Nath panth. Nath is a general term meaning ‘master.’ Members of the Nath sect are commonly called kanphata yogis. means ‘split-eared’ and refers to the yogis’ unique practice of having the cartilage of the ears pierced for the insertion of huge earrings. Yogi Matsyendranath knew the knowledge of hatha yoga. He gave it to Gorakhnath and others, and by their grace the author (Swatmarama) learned it.